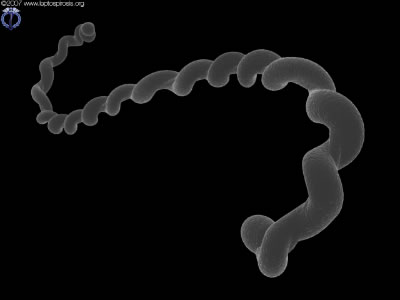 Weill’s disease is caused by Leptospira interrogans belonging to the serogroup Icterohaemorrhagiae or Pomona. A person who develops Weill’s disease will usually have gone through influenza-like symptoms of leptospirosis for a week or so, and seemingly be well on their way to recovery. After a short period of no symptoms or only mild symptoms, the person gets very ill with symptoms of poor liver function, poor kidney functions, meningitis and/or sepsis. The lethality for Weill’s disease is 5% – 10%.

Urine and blood from a leptospirosis infected person or animal can contain a sufficient amount of bacteria to spread the disease. A common transmission route for humans is getting urine or blood from an infected animal on damaged skin. Even a tiny skin abrasion can be enough for the bacteria to get into the body. Leptospira bacteria can also enter the body through mucous membranes, e.g. those found in the eyes, nose, mouth and genitals.

When infected blood or urine gets into water or soil, the bacteria can survive there for several months. Contract with contaminated water or soil can be enough to catch leptospirosis, e.g. if you have a small abrasion on your skin or get water/soil onto a mucous membrane. Also keep in mind that water and soil can contaminate food, and food can also be directly contaminated by urine and blood.

Many different animals can carry and transmit leptospirosis, including dogs, rodents, cattle, horses and pigs. An infected animal is often symptom free and can continue to excrete bacteria into the environment year after year.

The incubation time for leptospirosis in humans is usually one to two weeks, but anywhere from 48 hours to more than a month has been reported.

Examples of symptoms from the eyes

Exemples of symptoms from the skin 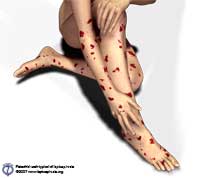 Examples of symptoms from the digestive system

Examples of symptoms from the respiratory system

Examples of other symptoms

Leptospira bacteria are sensitive to several different antibiotics, including well-known ones such as Penicillin and Doxycycline.

If the infection is diagnosed early and symptoms are mild, oral antibiotics are often sufficient. In more severe cases, intravenous treatment with antibiotics may be necessary. Each individual symptom can also require specific treatment. If kidney function is impaired, dialysis can be carried out.

When an MD has good reason to suspect leptospirosis in a patient, antibiotic treatment is typically started right away, without waiting for test results.